Mega Coin Squad is an Adult Swim game developed by Big Pixel Studios. It is a retro-styled platformer where collecting coins is the name of the game: the faster the better. With borrowed mechanics from classics such as Super Mario and the Sonic The Hedgehog titles, Mega Coin Squad is very easy pick up and play. A brief window to see the controls is all you need, the rest will intuitively develop as you dive into the first level. 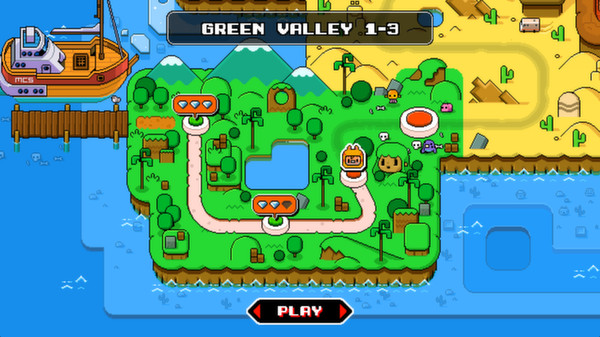 The game has no save features and therefore must be completed in a single sitting, much in the style of arcade games, but without bleeding your pockets dry. However, if you die after completing an area you can begin again from the first level of that area.  Whilst it’s ot the most popular of mechanics in today’s games, Mega Coin Squad features only 16 levels..

Each level has the same goal, collect ‘X’ amount of coins and bank them to complete the mission. There are also 3 bonus stipulations for each mission: Complete within the given time limit, bank all coins in one go and no lost lives on completion. Doing these will allow the player to unlock upgrades and bonuses that will stay with the player until they quit the game. Levels consist of floating destructible blocks that house bounties of coins and they are “active” for a set time before disappearing and another appearing in its place which will have a different layout. Some platforms have guardians and being hit by one will make you drop most, if not all of your coins. Thankfully, these monsters can be killed with various weapons that you pick up or the abilities of your character.

There are a number of different characters in the game to choose from and each has their own unique stats for speed, power, acceleration. Each supports a different play style and picking the one that suits you the best makes a big difference to your success in Mega Coin Squad.

Controls are simple, with 4 direction keys (WASD) or the arrow keys available and only two other buttons to dash and to use your current weapon ( or fire a less effective hadukon if no weapon is equipped). Dash can be combined with a direction to kill enemies, break boxes or jump gaps. Whilst dashing the player is immune to damage from enemies and enemy projectiles but not environmental hazards like spikes in the ground.

Gamers who grew up with Sonic and/or Mario will feel at home with Mega Coin Squad. . At times  there can be a lot going on in the space of a few seconds from dodging missiles and monsters whilst trying to break open a bomb to clear the area for optimal coin collection, but there is a method to the madness and knowing the mechanics thoroughly will serve you well.

While the sprites are nothing groundbreaking, the world is colourful and detailed enough to safely distinguish everything in the game clearly. The animations used are fluid and well made, making the game flow nicely even in the most hectic of times. The soundtrack compliments both the graphics and the gameplay with a fun and uptempo track.

Mega Coin Squad isn’t a ‘game changer’ but it’s a fun way to casually indulge in some coin hoarding. With a fast pace and challenging design it’s an enjoyable title. Ultimately however with the lack of an online multiplayer and relatively short single player campaign the game will likely only hold your attention for a limited time.

Kill Bill and four others in RONIN